I heard or read the Trump sound bite — “These are not people. These are animals.” — several times this week, always with no context to clarify who or what the pronoun “these” refers to.

I plan to use that line next time I visit the National Zoo. It’s going to be hilarious.

He was reviled by people who relied on the short, skewed attention span of the American public to avoid facing the regrettable fact that they use the same “dehumanizing” language themselves.

This doesn’t work as well as it did before Twitter became an online memory bank for better or worse. For example, here is CNN “journalist” Ana Navarro: 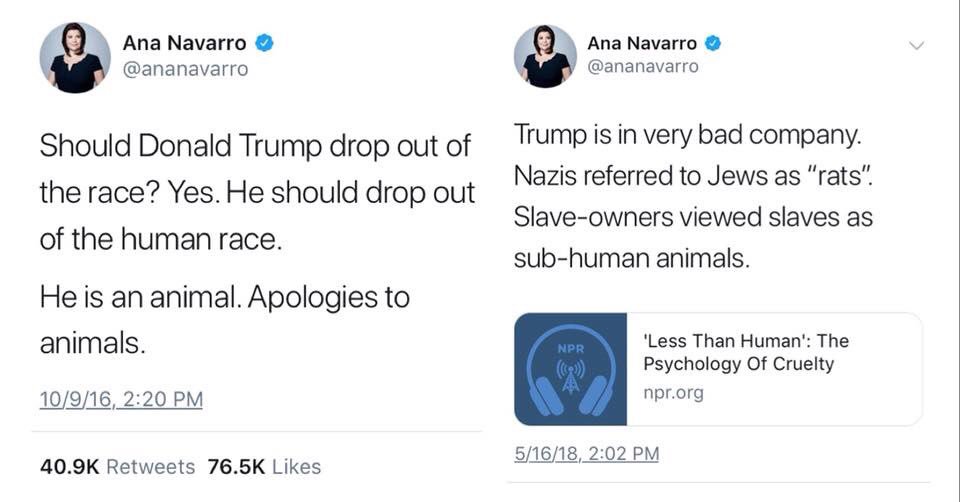 Once it became widely known that Trump was referring specifically to MS-13 gang members, Nancy Pelosi and other Democrats shifted to an “MS-13 members are people too” strategy that doesn’t seem promising.

Pelosi, who should probably be hidden away somewhere at this point, said that “there’s a spark of divinity in every person on Earth,” although I don’t remember her objecting when her party’s most recent presidential candidate identified half the country as “a basket of deplorables,” “irredeemable” and “not America.”

Trump supporters are irredeemable but homicidal gang members have “a spark of divinity”?

Can the Democrats win on that in November? I’m going to say no. It’s bad enough on its own merits, but — I say this as someone who is not an abortion opponent — it’s a perfect setup for asking why “unborn children” don’t have “a spark of divinity.”

I have offended God and mankind because my work did not reach the quality it should have.