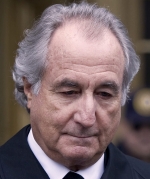 The death of Bernie Madoff reminds me that I never understood why he was so vilified. He ran a Ponzi scheme. All of his investors knew it was a Ponzi scheme. They chose to get in, and gambled that they could time their exits just right. Some succeeded, some failed. . . .

The fact that he not only claimed to return 10% in every kind of market condition but actually did so constituted something like proof positive that he was running a Ponzi scheme, for anyone who cared to take notice.

So I think Madoff’s “lies” go into the same category as the alleged “lies” of Barack Obama when he said that under Obamacare, anybody who liked his/her old health insurance policy would be able to keep it. Nobody capable of arithmetic could have believed such an outlandish statement — unless they gave it no thought whatsoever, in which case even if they were fooled, they were fooled about something they apparently didn’t care about.

In other words: It’s not a lie if nobody believes it.

← And That’s the Truth: The Talk
Dershowitz on Maxine Waters →