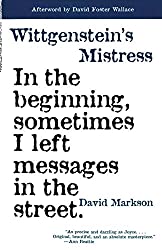 This book is terrible. It’s pretty well known and has a good reputation among fans of “experimental fiction” but it’s terrible.

It’s so bad that there should be a law under which the author could be arrested and charged with subjecting readers to the endless meanderings of a mediocre mind. The book could be read aloud to terrorists as a torture device.

I couldn’t come close to getting all the way through it and I hurled it into the garbage.

One star is a generous rating but it does take time and effort to write a book, even a bad one, and that can’t be ignored.

← Athlete, Humanitarian, Champion
Something I Had Left Behind →