From the National Review:

As you may have heard [I actually didn’t hear, for reasons that will soon become clear], on Friday night there was a mass shooting in Austin, Texas, in the Sixth Street entertainment district. Fourteen people were shot; as of this writing, one has died. This apparently wasn’t one of those loser-shoots-up-his-school mass shootings, but one of the more common shootings involving “some kind of disturbance between two parties,” as the police put it. So the shooter didn’t kill himself or wait around for the police and force them into shooting him. He fled, and the police, naturally, put out a description of him. 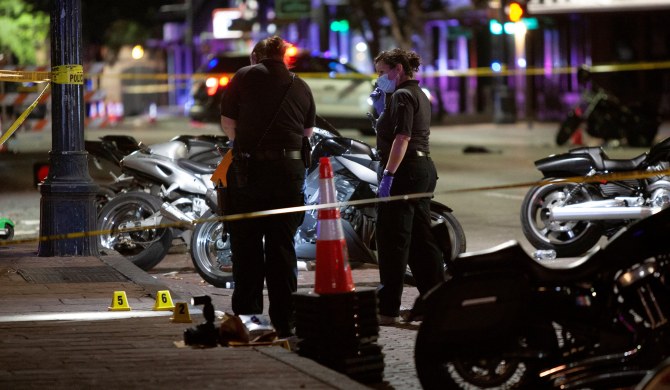 The Austin American-Statesman, the local daily, refused to publish that description. Instead, it put this editor’s note at the end of its report:

Editor’s note: Police have only released a vague description of the suspected shooter as of Saturday morning. The American-Statesman is not including the description as it is too vague at this time to be useful in identifying the shooter and such publication could be harmful in perpetuating stereotypes. If more detailed information is released, we will update our reporting.

Some of you will have guessed that this “vague description” did not involve a MAGA hat or a Confederate-flag T-shirt.

In fact, the description put out by the police was that of a black man with a skinny build and dreadlocks. Vague? Maybe. But nonetheless useful, and the Statesman is obviously wrong — and must know it — to claim otherwise. Black men compose about 4 percent of the population of Travis County. Skinny black men with dreadlocks (or braids — witnesses sometimes say one when they mean the other) make up an even smaller share of the population. In a county of 1.3 million people, eliminating 96 percent or 99 percent of the population is useful.

A suspect, a minor, was arrested over the weekend. A second suspect remains at large as of this writing. The local newspaper won’t tell you the relevant information about him, either.

What are newspapers for?

Newspapers exist to tell people about what is happening. . . .

If you believe that doing good necessitates keeping things from readers — or willfully misleading readers, as the Statesman did — then you have no business being in journalism. You should go do something else — join a cult, or seek out work in Amazon’s book-banning department, which amounts to much the same thing.

There are many complex issues touching the situation of African Americans vis-à-vis crime, police, and incarceration. None of them will be improved by adopting superstitious speech norms that prevent newspapers from reporting the facts about a given crime, including descriptions of the suspects. And the silly way the Austin American-Statesman did it — Gee, I wonder which stereotype was on their mind? — is as destructive as it is ridiculous. They may as well have written: “He’s black, okay? According to the description, anyway. You’re thinking he is, we know you are, and we’d rather not talk about it, so don’t make a big deal about it, alright?”

If you think the way to address our thorniest and most sensitive problems is to not talk about them — and to go out of your way to hide unwelcome facts related to them — then, for goodness sake, don’t become a newspaper editor. Go sell hotdogs.