From a podcast featuring Michael Shellenberger:

Progressives have controlled California for decades. Democrats have a supermajority in Congress. We spend more than any other state per capita on homelessness and mental illness, and we have the worst outcomes. 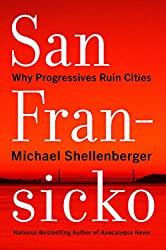 So I wanted to write “San Fransicko” to both get to the bottom of what’s really going on and also figure out what the solutions are because, obviously, we’re dealing with a catastrophe. I mentioned drug overdose deaths rose from 17,000 to 70,000 by 2017. Last year, drug deaths were 93,000, which is almost three times as many people than die from car accidents and four times as many people as die from homicide. Clearly, we are in the midst of a massive drug crisis, and it felt like nobody was offering a particularly clear explanation of it or offering very good solutions.

San Francisco remains one of the most spectacularly beautiful cities in the world. . . .

But as soon as you drive downtown, you see . . . what are euphemistically called homeless encampments, but they are more accurately described as open drug scenes. . . .

In the 1980s, what we called homelessness—I point out in the book that homelessness is a propaganda word. It was designed to mislead people about what’s really going on. It was designed by progressives to mislead people into thinking that people live on the street because they can’t afford the rent. That’s not the case. The people on the street, we know, are there because of addiction and untreated mental illness. . . .

You see people openly using drugs, smoking fentanyl, which is responsible for about half of the drug deaths, people defecating in public. It’s very common to see that. . . .

At the very simplest level, you do not need to have anybody living on the street if you just build enough shelters and require people to use them. That’s what most developed and civilized cities around the world have done. Before the pandemic, New York basically sheltered 99% of its homeless.

The reason that we have so many people unsheltered living on the street in California is because the progressives have opposed building sufficient shelters and requiring people to use them.

So at the simplest level, it’s just that. It’s just that we have had what’s called a “housing first” policy rather than a “shelter first” policy. Housing first, of course, meaning this idea that anybody who wants their own apartment should be able to get one. It’s completely ludicrous. Even if you are a socialist, even if you’re radical left, it doesn’t make any sense. You can’t provide that much apartments and housing for people.

First of all, you just can’t build it in San Francisco because there’s so much NIMBYism, and the regulations are so strict against building housing. But also, there’s just not the money for it. You can’t just provide free apartments for everybody. That may seem more obvious to listeners of Heritage Foundation than listeners to MSNBC, but it’s just the fact of the matter. . . .

What you basically have is massive untreated mental illness, including severe mental illness. You have the ACLU, which I think in many other contexts has done good things, I have been a longtime supporter of ACLU, but in this case, we have the ACLU irrationally defending leaving people with schizophrenia on the street, in states of psychosis, using hard drugs, living in totally unsafe, unsanitary conditions; having a complete double standard when it comes to requiring people with dementia, for example, our grandparents who suffer from dementia, either from Alzheimer’s or something else, we don’t let grandma and grandpa wander onto the streets, and yet we allow people in psychotic states to do that. They use a double standard to justify it.

What I get at, the bottom line here, is that this is a victim ideology, meaning that there’s an ideology here. And it’s just as dumb as it sounds, unfortunately. It’s the idea that you can classify certain groups of people as victims.

The racist aspect of this is that progressives classify all African Americans, all people of color, except for Asians, as victims. But they also classify people with mental illness as victims. They classify children. They classify women, gays and lesbians, people suffering addiction are all classified as victims. That’s the first thing they do.

The second thing they do, which is as insidious, is that they believe that, to victims, everything should be given and nothing demanded. This is terrible for . . . dealing with people suffering from addiction and mental illness.

During the pandemic, the city of San Francisco … the social workers for the city were actually buying people alcohol and delivering alcohol and drugs to people’s hotel rooms. It’s so bonkers that when I describe it, it sounds like I’m describing a fictional dystopian film, but this is actually what’s happening in San Francisco.

The San Fransickness that the title refers to, yes, it’s referring to the folks that are living in squalor on the streets, but it also is referring to a kind of compassion sickness, a compassion unchecked by discipline, by reciprocity, by personal responsibility, by the things that people need in order to improve their lives. . . .

Does that mean that you’re going to eliminate drug dealing? No. But I’ll tell you, it’s interesting, if you’re an addict and there’s no open drug dealing, you often have to spend a bunch of your day finding your drugs, buying them, and that means you end up doing less drugs. So it’s not great. I’d love to see fentanyl eliminated and meth, but these are highly-concentrated drugs. We haven’t been able to get rid of them.

I think the idea that we can stop China or Mexico from getting them over the border is a fantasy. You can mail enough fentanyl to somebody through FedEx to supply an entire city. But you can shut down the open drug dealing. That’s easy. Shut it down. The addicts will end up using less. Right now, it’s too easy. The open drug scenes are addicts living in open drug markets, and they’re just ending up using hard drugs every four hours. It’s barbaric, and it makes them sick and they die. You can’t allow that.

To go wrong in one’s own way is better than to go right in someone else’s.