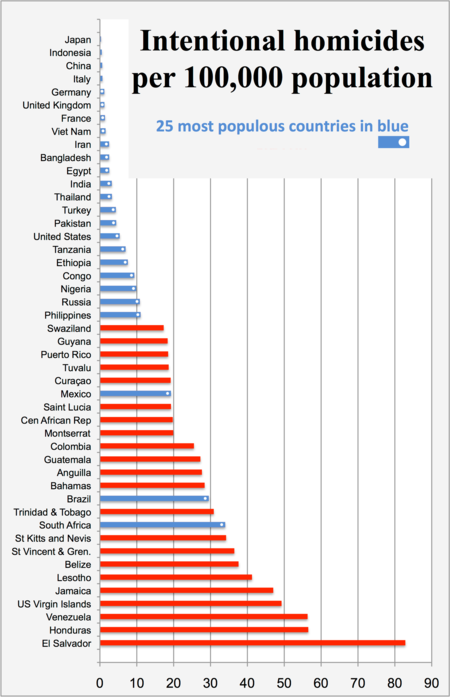 The most common statistical sleight of hand when it comes to showing charts of gun murder rates per capita by country, with the United States always in the lead, is that these charts, somewhere in the fine print, and sometimes not at all, note that they’re only charting so-called “developed” countries, meaning that the U.S. is being compared to countries like Japan and France, but that Latin American countries and African countries, among others, are left out.

So — 50+ people shot to death in a Nigerian church? Doesn’t count because Nigeria is not a “developed” country.

(The other thing you have to pay attention to is whether a chart is showing gun murders or gun deaths. The U.S. has a very high suicide rate compared to most other countries — more than 60 percent of our gun deaths are suicides — so rolling the suicides in with the murder count inflates the U.S. gun death count big time.)

Above is a UNODC (United Nations Office on Drugs and Crime) chart showing murder rate per capita by country. Without counting one by one, I’d say the United States is not even in the top 30.

The charts showing the United States in the lead by leaving out all the countries ahead of us are “misinformation,” or to say it another way, they’re lies.

You might object, and rightly so, that this chart shows homicides by any means and not specifically gun murders, and I have to admit I couldn’t find a similar chart for gun murders.

I did find a Top 10 list from World Population Review showing countries with the highest rates of gun homicides per 100k residents in 2019:

I don’t know where the U.S. would rank on this list but the UNODC list shows the U.S. with what looks like about six murders per 100,000. Round it down a little to account for stabbings, blunt instruments, etc., and we’re not close to making the Top 10 chart.

Since El Salvador has the lead on both lists, we might ask what sort of gun control laws do they have in place in El Salvador.

First of all, in El Salvador, there is no equivalent to our Second Amendment. There is no right to own firearms. All private firearms are “regulated by the Ministry of National Defence and the National Civil Police” and “only licensed gun owners may lawfully acquire, possess or transfer a firearm or ammunition.”

To qualify for a license, an individual is subjected to a background check “which considers criminal, mental and health records.” In addition, a prospective licensed gun owner must demonstrate an “understanding of firearm safety” and must “re-qualify for their firearm license every three years.” Failing to renew the license would result in confiscation.

Further, in El Salvador, “the law requires that a record of the acquisition, possession and transfer of each privately held firearm be retained in an official register,” “the private sale and transfer of firearms is prohibited” and “the number and type of firearms which can be sold by a licensed gun dealer to a single gun owner is limited to one firearm every two years.”

In other words, El Salvador laws are a gun control advocate’s wet dream but they don’t prevent gun murders.

Another lie in the national gun control narrative is that Democrats would desperately love to save lives by enacting all sorts of gun control measures (although they really wouldn’t because it would irritate important Democratic constituencies in big cities) but can’t because evil Republicans have been bought off with NRA money.

OK, that’s actually two lies. First, the NRA is not even in the top 1,000 donors to politicians. Maybe they used to be, I don’t know, but I’m looking at the Open Secrets website and for the 2022 political cycle, the NRA has made contributions of $217,026.

Gun murders, and violent crime in general, is concentrated in big cities that probably haven’t elected a single Republican to citywide office in my lifetime. Democratic politicians in these cities can enact any gun control laws they want, unimpeded by Republicans because there aren’t any Republicans.

Note that these gun control laws have not reduced murder or violent crime in urban areas.

This is why Democrats talk so much about the NRA and “gun culture,” meaning white, middle-aged, rural, southern, Evangelical NASCAR fans. They desperately want to put a Republican-looking face on a Democratic problem.

Violent crime is not committed with legally obtained guns. The Department of Justice found in 2019 that less than 2 percent of all prisoners had a firearm obtained from a retail source at the time they committed their crimes.

“I was going to commit a violent crime, maybe kill a few people, but I changed my mind because I didn’t want to have an illegal gun possession charge on my record,” said nobody ever.

Revisiting the gun murders per capita by country charts, as I said, usually the U.S. is compared only to “developed” countries like Japan or the United Kingdom, and people might say “These other countries have strict gun control, hence much lower murder rates.”

I don’t think it’s the guns. I’m not sure what is the right word for it. “Culture” comes to mind. But there are a lot of Japanese people in the U.S., they have access to all the guns they want, and they don’t shoot anybody here either. Nor do I hear about Brits shooting people in America, at least not in the last 200 years or so.

It’s a good thing that the colonists in 1776 had the right to private gun ownership or the Brits might still be here running the place.

The Model 1873, aka the Winchester 73, was marketed as “The Gun That Won the West.” The Colt six-shooter became known by the same appellation, although not as a marketing slogan.

You see the mindset? America exists in its current form because we killed the people who impeded us.

America is a badass country.

Psychopaths are not deterred by laws.