Things That Pop Up and Poke You in the Eye

We’re discussing whether our organization will use a popup user survey on our web site . . . 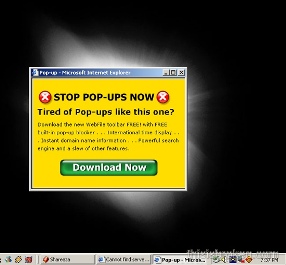 “I propose doing the survey without the popups,” I say. “That’s why browsers have popup blockers, because people don’t like popups. A popup is like a poke in the eye. I don’t like it when things pop up unexpectedly and poke me in the eye. Whenever that happens, I make sure not to go back to that place anymore.”

Unfortunately, no one picks up on the “popped up and poked me in the eye” motif because I was then going to chide them for their junior high school mentality.

“I had a teacher who used to say that,” a young woman says. “‘It’s better than a poke in the eye with a sharp stick.'”

I say, “I used to work with a guy who said, ‘You can’t beat that with a sharp stick.’ Why would the stick have to be sharp if you’re going to beat someone with it? You’re really just looking for something with a little heft to it.”

The same woman says, “I had a boyfriend who used to say, ‘You’re not going to hold that over my shoulder, are you?'”

“You have abysmal taste in men.”

I wasn’t able to persuade the team to abandon the popups. The argument in favor was that a lot of web sites use popup surveys so how bad can they be?

I worked for a dot-com consulting company during the boom and bust of that industry. The whole thing was based on the notion that everyone else is doing it so it must be a good idea.

The subsequent implosion of the entire industry disproved that theory rather dramatically.

Since then, I try to stay open to the possibility that even though a lot of people are doing something, it still may not be a good idea . . .

← Scent of a Woman?
The Man Happy in His Work →

There is no fate that cannot be surmounted by scorn.

— Albert Camus, The Myth of Sisyphus