We went to a comedy show at the Irvine Improv on Friday night. Gilbert Gottfried was the headliner. I happened to recognize one of the comedians, David Angelo, sitting in the back of the room before the show — I’m a fan of his work on Twitter and YouTube — and he was gracious enough to pose for a photo taken by my wife: 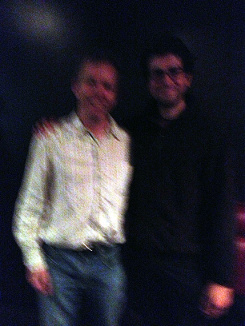 Now you might say that’s not a very good photo, but it is recognizable as two human beings, which is more than you could say before I spent an hour working it over in Photoshop . . .