Men at some time are masters of their fates:
The fault, dear Brutus, is not in our stars,
But in ourselves . . .

The Programmer finds that the integration chickens have come home to roost . . . 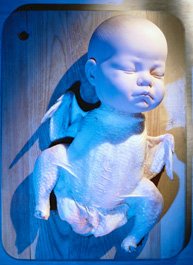 I remember when Vignette first arrived at our company and the people who had made the decision to buy it would show up at meetings in their complimentary Vignette polo shirts and explain that the project was going to be delayed just a bit more because they still couldn’t work the bugs out of the Vignette installation — but hey, willya look at these free shirts we got?!

Well, we’ve been trying to work the bugs out of it for three months now, and to integrate it with IBM’s WebSphere for a client project.

Through it all, we clung to the hope that the upcoming release of Vignette 5.6 would solve all our problems by working — as promised — with WebSphere 5.1.

That is to say . . . even though 5.6 hasn’t been officially certified by Vignette to work with WebSphere, the rep who provided the free shirts told us that he personally thinks it will work, so we’re counting on it.

The failure of the 5.6 release has been a horrible psychological setback, and there has been mourning and lamentation.

But . . . if we were to indulge in a moment of introspection, search our conscience, we would have to admit that this is a risk we incurred when we elected to create the dependency on Vignette — that Vignette might somehow drop the ball, that their next release might be a piece of crap, that they might change their product strategy, that they might fire the remaining 85% of the workforce and go out of business entirely, any of which would be a body blow to those of us who’d elected to build web sites around their technology.

It’s like handing a loaded gun to a trained ape (and a poorly trained ape at that). When something goes wrong, you can’t blame the ape.

It’s a way of living with a tragedy, I guess, to claim after it happens that you saw it coming, as if somehow you had already made the necessary adjustments beforehand.

Well, Mr. Project Manager, it’s not even something that was coming . . . the whole project from Day One has been an integration nightmare. And there’s really no credit in having seen something coming if you did nothing to avert it. It makes people think that maybe you didn’t see it coming, or if you did, that you grossly underestimated the severity of the problem, or you didn’t care, or you thought you could bluff your way through it.

Integration of third-party products is always hard and best avoided.

The problem isn’t specifically with Vignette or Websphere. Substitute your own favorite “best of breed” solutions; the issues would still be the same.