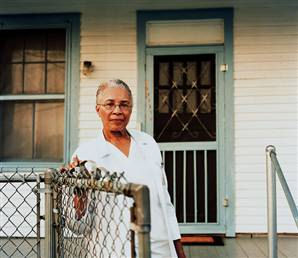 Ruby Jones, 67, worked in the hospice unit at Lindy Boggs Medical Center in New Orleans. Last August, as Hurricane Katrina was zeroing in on the city, she elected not to evacuate, but to stay with the eight dying patients under her care.

She has been recognized by Newsweek as one of “15 People Who Make America Great”:

“I didn’t want to shirk my responsibility knowing there was a hurricane coming,” she says. On Monday, as raging winds shattered the hospital’s windows and burst open doors, she gently whispered in her patients’ ears, “We are here with you, and we aren’t going to leave.” By Tuesday, the situation had turned dire; the power was out, the water supply was choked off and the hospital was flooding. Still, amid the mounting mayhem, Jones continued to tend to her flock–bathing them, feeding them, dressing their wounds. When aid arrived on Wednesday, she helped evacuate them, though three died before they could be rescued.

Also singled out by Newsweek for her valor during Hurricane Katrina was CNN anchor Soledad O’Brien.

What did she do, you ask?

Well, she gets paid a lot of money to go where she’s told and report on what’s happening when she gets there, and last August she was told to take “her calm voice and soft beauty” to New Orleans. Good career move as it turns out because — guess what? — a big hurricane had just demolished the place!

Kudos to Newsweek for honoring Ruby Jones, but my God, who would think of equating the actions of these two women? Does being juxtaposed with Soledad O’Brien trivialize Ruby Jones’ extraordinary display of compassion and humanity, particularly under conditions in which a lot of people were losing their cool and behaving terribly? You bet it does!

If it wasn’t for Brad Pitt, most Americans would never have heard of Namibia. They might not know about AIDS orphans in South Africa, or the plight of children in Haiti, or what transpired at the World Economic Forum in Davos, Switzerland.

← Nobody Likes Us
Is Soccer a True Sport? Discuss. →