What Would Andrew Jackson Say? 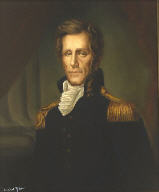 My son and I are sitting around the house when the phone rings. He looks at the caller ID, which says something about Recruiting.

We don’t pick it up, and a female voice comes on to leave a message, which has nothing to do with the army.

“A woman?!” he shouts. “What would Andrew Jackson say about that?”

← The Next Best Thing to Being There
Lit Quiz →