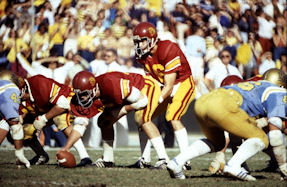 When I was growing up in Southern California, USC and UCLA both played home football games at the Coliseum. And every year, when the teams played each other, they both wore their home uniforms — the Trojans wore cardinal jerseys and the Bruins wore blue.

That tradition ended in 1982, when UCLA began playing home games at the Rose Bowl, because NCAA rule 1-4-3-a states that “the visiting team shall wear white jerseys.”

Pete Carroll announced today that when the Trojans come out of the locker room at the Rose Bowl this Saturday, they’ll be wearing cardinal jerseys, in violation of NCAA rule 1-4-3-a.

They will then be assessed a penalty of one timeout per half.

Wait, what — they lose two timeouts?! OMG, they might NEED those timeouts! Oh sure, USC is heavily favored but it’s a RIVALRY game! Throw the record books out the window!! Anything can happen!!!

There are three rules for writing a novel. Unfortunately, no one knows what they are.