The CFO announced at our all-company meeting this morning that one of our colleagues had fallen down the main stairwell at the office yesterday. 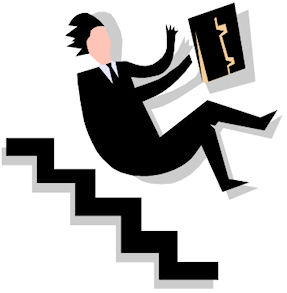 (That stairwell has a marble-like tile surface, so if you were to take a fall on it, it’s gonna leave a mark, no question about it.)

As a result, the stairwell is closed until the building architect can figure out a way to make it “safer.”

One clumsy person ruins it for all of us.

I thought about raising my hand and proposing that those of us who like to live dangerously be allowed to sign a waiver acknowledging that we’re willing to walk up and down the stairs at our own risk.

But I didn’t. I just sat there.

Then a strange thing happened . . .

Others began to raise their hands and weigh in on the uneven surfaces, the depth perception in the stairwell being off somehow, etc., and as they did, the futility of what was happening seemed to grab me by the throat . . . I felt something — hope? resolve? IQ points? — draining out of my skull, so I discreetly got up and left the meeting — my silent, feeble protest against what’s happened to us as Americans.

On the bright side, at least she wasn’t in a car accident. I’d have to ride my bike to work . . .

3 comments for “Falling Down Stairs”