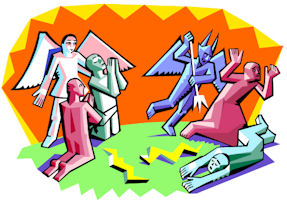 My son’s at a church camp in San Jose for the next week. He doesn’t actually go to the church, but friends of his do, and he’s been to this camp with them before and liked it.

He left yesterday morning, which was Fathers Day. That’s the first thing I don’t like about this camp, that they take the kids on Fathers Day.

The next thing I don’t like is that they collect the kids’ cell phones when they arrive, so they can’t call home except in cases of emergency.

“I thought churches were supposed to teach kids to honor their parents,” I say to my wife. (She’s not sympathetic to this line of inquiry. She thinks all churchgoers are good people although I’ve never been able to see the correlation.) “They’re probably up there right now telling the boy his dad is going to hell . . .”

← Feeling the Burn
Goofus and Gallant →

Where there is no vision, the people perish.