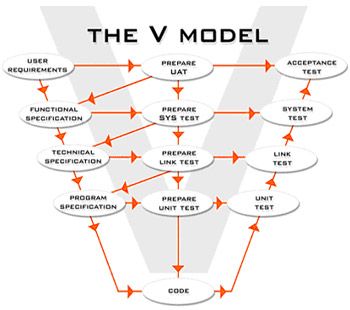 The graphic on the right came up for discussion at the office today.

The V Model is a traditional model, still widely used, but (IMO) bad for at least a couple of reasons.

IMO, you can use a design-code-test V model, but you have to use it iteratively every week or two weeks or at most every month on a project to avoid these problems and make sure users are getting what they want.

Yet man is born unto trouble, as the sparks fly upward.