We had good seats at the USC game today — Section 13, Row 1, right next to the field.

Now you might say, like my son did, that they would have been better on the 50-yard-line, but there are a couple of good things about those seats.

One is that they’re right next to the tunnel where the players come on and off the field, as do the song girls, the band and Traveler, so you get to interact with people — talk to the girls, high-five the guy on the horse, etc. 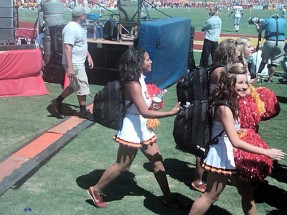 The other good thing is that the Trojans scored 6 out of 8 touchdowns in the west end zone right in front of us. 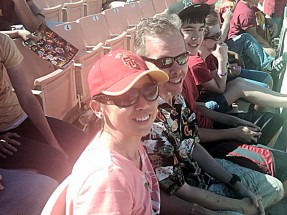 That’s my wife, me and a kid who looks a lot like my son except that he’s smiling. If you’re wondering about all the empty seats, the photo was taken near the end of the fourth quarter of a 56-3 game when a lot of people had already left.

A man should never be ashamed to own he has been in the wrong, which is but saying, in other words, that he is wiser today than he was yesterday.