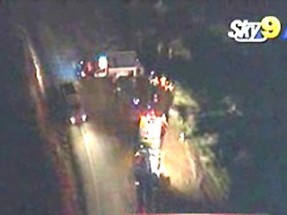 Authorities say a motorist has driven off a cliff, plunging about 200 feet down a steep canyon near Calabasas, after swerving to avoid an animal on the road.

Ouch — was he a PETA member?

I like animals. I ran over a squirrel once and I felt terrible about it but the little critter just dashed right out in front of my car.

However — in the event of having to make a split-second decision between clobbering an animal and driving off a cliff, well, the animal is going to get it.

On a side note, kudos to the headline writer for the alliteration: “Careens Off Calabasas Cliff.” Who says a liberal arts education isn’t good for anything?