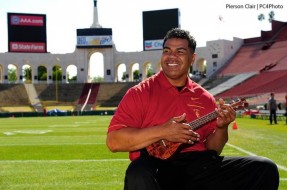 Seau was a legend in San Diego, where he lived and played most of his career. He was also a legendary member of the USC Trojan Family.

The number 55 is now synonymous at USC with great Trojan linebackers, but Seau was the player who made the number famous. It has since been worn by Willie McGinest, Chris Claiborne and Keith Rivers and is only assigned at the head coach’s discretion.

This picture was taken just a couple of weeks ago at the USC Spring Football game. He doesn’t look like someone ready to end his own life, but you never really know what someone’s life looks like from the inside.

← Ruby on Rails for Rubes
The Birth of Free Market Economics →