If Everything Goes as Intended . . .

If [Affordable Care Act] implementation goes as intended and widespread utilization and automation are achieved, providers could save about $11 billion per year. 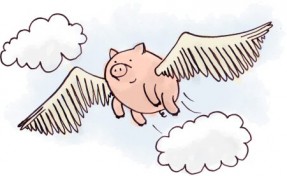 You really can’t dispute something as vague as that but it does raise a number of questions:

In other news, if my plan to grow wings on pigs goes as intended, it could revolutionize the way we export bacon.

I asked the friend who called the NEJM article to my attention what going “as intended” means in the context of the ACA and he said, “I think it means legislators don’t muck with it too much.” What does “muck” mean? What does “too much” mean? We could go on and on . . .