Why is it Okay to Hate the Rich But Not the Poor? 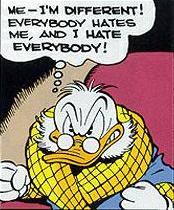 There is a feeling outside Silicon Valley that those inside the tech business are living in a tone-deaf bubble of arrogance. . . .

Here is the evidence that Silicon Valley is living in a bubble of its own arrogance.

1 comment for “Why is it Okay to Hate the Rich But Not the Poor?”

To be useful was the best thing the old men ever hoped for themselves, and to be aimless was their worst fear.