EppsNet Book Reviews: All Quiet on the Western Front by Erich Maria Remarque 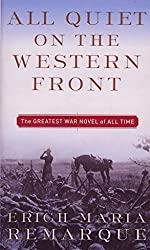 This book is to be neither an accusation nor a confession, and least of all an adventure, for death is not an adventure to those who stand face to face with it. It will try simply to tell of a generation of men who, even though they may have escaped shells, were destroyed by the war.

Remarque was a German author born Eric Paul Remark, changed his last name to a French spelling and adopted his mother’s middle name, Maria, as his own.

It says on the cover “The GREATEST WAR NOVEL of ALL TIME.” I can’t think of a better one. The Red Badge of Courage is really good. The Emigrants is remarkable but I’d have to put it in a different category, a post-war novel. Regeneration is very good.

Catch-22 and From Here to Eternity I couldn’t even get all the way through either one of them.

Slaughterhouse-Five is good. Mother Night is good. I’m going to call that a war novel, even though it’s not a battlefield novel. But I don’t think either one is Vonnegut’s best work because that would have to be Breakfast of Champions.

War and Peace I have to admit I haven’t read, nor have I read Gone with the Wind, although I loved the movie.

All Quiet hits you like a rifle butt in the face. Really a powerful work. Bob Dylan cited it in his Nobel acceptance speech as a significant influence on his songwriting.