Ironic Twist of the Year Award 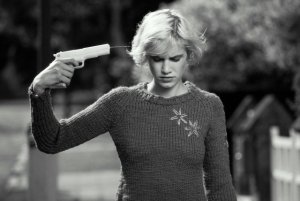 Leaving men wholly, totally free
To do anything they wish to do but die . . .

According to Slate, if NRA president Charlton Heston does in fact develop full-blown Alzheimer’s disease, California state law would compel him to surrender his firearms.

The Dangerous Weapons Control Laws state that anyone who represents a threat to others because of a mental disorder or illness can’t own a firearm.

California also denies gun ownership to those suffering from any kind of grave illness — I guess as a suicide prevention measure.

It really staggers me that in a free country we have laws like that . . .