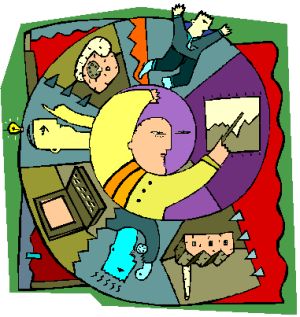 A friend of mine asked me the other day, “Do you think an organization really values a good manager?”

He asked me that because he’s moving from a position as lead developer on a high-visibility system (lots of job security) to a position managing the developers of that system.

And I had to say that in general, I think the answer is no, which is why you see managers generating a lot of useless paperwork to make their work visible: project plans, Gantt charts, spreadsheets, flowcharts . . .

Does this help? I haven’t found that it does, but it does provide an illusion of control and an acceptable way of failing: the manager can point to all the paperwork and say, “Well, I followed the accepted process right down the line, so the fact that we failed can’t be my fault!”

Our local basketball team is coached by a guy named Phil Jackson. He’s not nearly as animated as most coaches . . . he spends most of each game sitting quietly in his chair on the sidelines, even when things seem to be falling apart for the team.

When things aren’t going well, he gets a lot of criticism for this:

They lost the game and he didn’t do anything!

I think this is why most coaches spend the whole game jumping up and down, yelling, tearing their hair out . . . they want to be seen as having done something.

Even if the team loses, people say, “Boy, he really coached his ass off.”

I grew up in Southern California during the years that John Wooden was coaching the UCLA basketball team. Like Phil Jackson, Wooden was distinctly non-animated during games.

He sat on the sidelines holding a rolled-up program in his hand, rarely called time-outs . . . his teams won 10 national championships and he hardly even got out of his chair the whole time.

He believed that the real work was done behind the scenes — preparation, attention to detail. Bill Walton summed up Wooden’s coaching style like this:

A well-managed team should have a clear, common vision, a robust flow of ideas, a reputation for high-quality work . . . but it may not be obvious to an observer what role, if any, the manager had in developing these qualities, because a lot of what a good manager does is not visible . . .

← I Sit By The Window
Two Short Arguments For Affirmative Action →