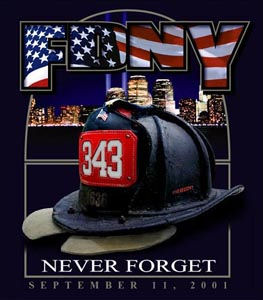 It was the office workers leaping from the towers to escape the flames that firefighter Maureen McArdle-Schulman could not block from her mind.

“Somebody yelled something was falling. We didn’t know if it was desks coming out. It turned out it was people coming out, and they started coming out one after the other…. We saw the jumpers coming. We didn’t know what it was at first, but then the first body hit and then we knew what it was. And they were just like constant…. I was getting sick. I felt like I was intruding on a sacrament. They were choosing to die and I was watching them and shouldn’t have been. So me and another guy turned away and looked at a wall and we could still hear them hit.”

Emergency medical technician Mary Merced was transfixed. The images remained vivid. “I see debris drop. And I look and it was people. I could tell you almost every color clothing all the people that I saw fall had on, how they fell, if they tumbled, if they swan-dived.”

[Fire Chief Mark] Steffens could not shake the memory of a lone probationary firefighter he encountered on the street.

“I saw one proby — he had proby on the helmet — by himself, walking by himself. I tried to get him to come with us. He said: No, no, I’ve got to go back. We washed his eyes. I gave him something to clean his face. Then he turned and went back into the cloud. I never saw him again.”

“Do you recall his name?” a member of the administrative panel asked.

“I didn’t want him to go back and he wouldn’t listen to me,” Steffens said. “He just walked back into that big black cloud.”

But now isn’t simply now. Now is also a cold reminder: one whole day later than yesterday, one year later than last year. Every now is labeled with its date, rendering all past nows obsolete, until—later or sooner—perhaps—no, not perhaps—quite certainly: it will come.