Of course you know this means war.
— Bugs Bunny

Muslims are offended by cartoons portraying them as violent fanatics. Naturally, they’ve responded with violent fanatacism. I’ll say one thing for these people, they know how to stage a lively protest. Yesterday, a few protestors got so enthusiastic that they had to be killed. 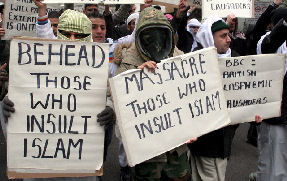 Hamshahri, a prominent Iranian newspaper, has launched a cartoon counter-offensive: a competition for Holocaust cartoons.

Hey, I’ve got an idea! You have a drawing of Hitler standing at a podium, big swastika behind him, addressing a packed hall of Nazis, and he says

(Okay, I stole that from an old New Yorker cartoon, but how many people in Iran take the New Yorker?)

← Earthquake Preparedness
Another Sign That Civilization is Circling the Commode →

I’d like to thank my family for loving me and taking care of me. And the rest of the world can kiss my ass.