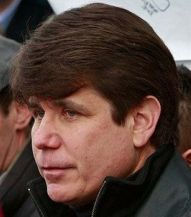 This guy is beyond satire:

[Illinois Governor Rod Blagojevich] rarely turns up for work at his official state office in Chicago, former employees say, is unapologetically late to almost everything, and can treat employees with disdain, cursing and erupting in fury for failings as mundane as neglecting to have at hand at all times his preferred black Paul Mitchell hairbrush. He calls the brush “the football,” an allusion to the “nuclear football,” or the bomb codes never to be out of reach of a president.