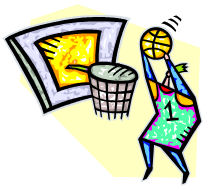 I was shooting some hoops at the park this afternoon with my boy, sort of guarding him so he could try out some moves.

I suggested that when he drives past a defender, he should cut back into him to keep him from reaching out and making a play on the ball. He tried it again but still didn’t cut back into me with enough gusto.

The third time, he overcompensated. Before he even got past me, he drove his shoulder into my solar plexus and knocked me off the end of the court.

Did I mention he’s the same size as me and a lot younger? Ouch . . . I’m still feeling it right now.