It took less than a day for the arrest of Henry Louis Gates to become racial lore. When one of America’s most prominent black intellectuals winds up in handcuffs, it’s not just another episode of profiling — it’s a signpost on the nation’s bumpy road to equality.

If this man can be taken away by police officers from the porch of his own home, what does it say about the treatment that average blacks can expect in 2009?

“Profiling” implies an absence of facts or evidence. It means “I’m targeting you for suspicion simply because you’re black and therefore more likely to be engaged in criminal activity.”

That’s not what happened here.

A police officer responded to a 911 call reporting two black males breaking into a house. When he arrived, he found a black man in the house. You don’t have to be Dick Tracy to identify the man as a potential suspect.

Police pulling over black drivers just because they’re black? That would be profiling. But why do they pull over white drivers? Why do they keep pulling me over?

The 58-year-old professor had returned from a trip to China last Thursday afternoon and found the front door of his Cambridge, Mass., home stuck shut. Gates entered the back door, forced open the front door with help from a car service driver, and was on the phone with the Harvard leasing company when a white police sergeant arrived.

Gates and the sergeant gave differing accounts of what happened next.

No they didn’t. Gates was uncooperative and he was arrested. Everyone agrees on that.

But for many people, that doesn’t matter. All they see is pure, naked racial profiling.

“Many people”? How many? And why wouldn’t it matter? Because a white cop can’t be trusted? I’m seeing racial profiling here, but not on the part of the cops. 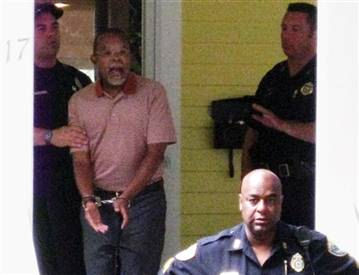 Here’s Gates on his porch in a photo taken by one of his neighbors. He’s yelling something at a black officer, who’s ignoring him, while two white officers trying to calm him down.

What’s your badge number? You don’t know who you’re messing with! I’ll make a documentary about this!

I know lots of people who’ve had unpleasant run-ins with cops over the years, including arrests and beatings, but not because they’re black. In fact, all of them are white. The common denominator is that, like Gates, they all have attitude problems.

Cops have to deal with the situations that nobody else wants to deal with. They’re the agency of last resort. I’ve only called in the police twice in my life — once when the guy next door was shooting off a rifle in his driveway in the middle of the night, and once when a person went berserk in my home. Everything else I felt like I could handle myself.

I’ll tell you right now, if your neighbor is shooting off a rifle or someone’s going nuts at your house, don’t call me because I’m not coming over. Call the police.

I have no problem being deferential to cops. It makes sense to me that when your job is dealing with volatile, high-risk situations, you want to establish control and you don’t want to put up with a lot of nonsense.

I wonder how Gates would handle a similar situation. Probably the exact same way. Let’s say he’s teaching a class and one of the students is a disruptive wiseass. How long is he going to put up with that — the whole semester? My guess is he’s going to shut it down pretty quickly. Nobody likes a wiseass interfering with his ability to do his job.

President Obama weighs in: “I think it’s fair to say, number one, any of us would be pretty angry.”

And when they got there and found someone in the house, I’d like them to check that person out thoroughly, even if it turns out to be me.

“It’s okay, officer,” I’d say. “It’s my house.” Of course, an intruder might say the same thing. What’s the cop supposed to do? Turn around and go back to the station? It’s all right, the guy said it was his house. No — get the guy out of the house and figure out who he is, even if it’s me.