I got an email today from a confused person who says that “any dog of any breed can have bad temperament, poor training and poor socialization, and can therefore be a problem.” 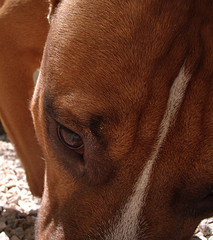 Fair enough, but there are “problems” and then there are problems, and if you don’t account for the size and strength of the breed, you’ve got a pretty silly argument on your hands.

In our neighborhood, we have an angry Chihuahua with a crazy owner. The owner is crazy and the dog is crazy. We see them sometimes when I’m out walking Lightning. The dog yaps and yaps and strains at the leash and Lightning just looks at him like, “You’ve got to be kidding.”

A poorly socialized Chihuahua doesn’t create the kind of problem that anyone really cares about.

On the other hand, there’s another aggressive dog — a pit bull mix, much bigger than a Chihuahua. He got out of his yard one night and attacked a Shih Tzu and its owner . . . and by “attacked” I mean the woman was bleeding on the sidewalk when I ran out to see what all the screaming was about.

Attacking people and pets — that’s the kind of dog problem people care about.

Not to pick on pit bulls, there’s another pit bull on the next street over from us, still a puppy but already pretty big. She’s obedient and sweet. Lightning and I both like her.

We have a couple of Rottweilers in the neighborhood. I like Rottweilers. Good-looking dogs. I see them out for a walk and when the Rottweilers want to cross the street, they cross the street, whether the owners want them to or not. They seem like nice dogs, but when an owner has a big dog that they can’t control, that has the potential to create a problem that people care about.

The CDC opposes breed-specific dog laws but in a study they found that when people manage to get themselves killed by a dog, it’s always a large dog and it’s usually a pit bull or Rottweiler.

Amazingly, in 20 years not one person was killed by a pug.

The only limits are, as always, those of vision.