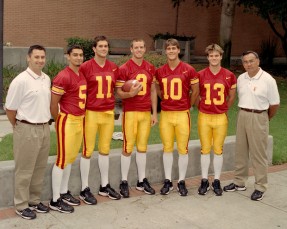 Oakland Raiders sign Matt Leinart to back up Carson Palmer

Backing up both of these guys was Matt Cassel (#10), who has so far had a better NFL career than Leinart, despite a college career in which he threw zero touchdown passes and never started a game.

I don’t know who the other two kids are. The coaches are current Washington head coach Steve Sarkisian and current Hawaii head coach Norm Chow.