Another Reason Notre Dame Has a Terrible Football Team 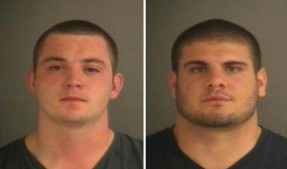 Officers reported that several people began jumping over a fence when they arrived and, specifically, they observed a group of five men attempting to jump over a fence and ordered them to stop, said Capt. Phil Trent, South Bend police spokesman.

Police arrive to break up a party, five guys jump over a fence and the only two who get caught are Notre Dame football players.

I felt an undercurrent of poignant sadness, but I kept telling myself that this was an intrinsic feature of all true bliss.