Ed Ruscha has resigned as a MOCA trustee, as have John Baldessari, Barbara Kruger and Catherine Opie, leaving no artists on the museum’s board.

“Art” and “artist” are words that get tossed around pretty lightly. Ruscha‘s work — and the same goes for Baldessari and Kruger — consists of modifying photos and other images, often by writing words on them.

Opie is a photographer whose work is less interesting than the average high school yearbook.

Yesterday, the image below was posted on the MOCA Facebook page. It’s an actual museum piece called “Earthwork aka Untitled (Dirt).” 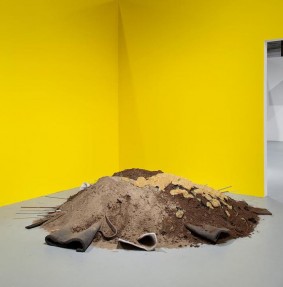 This is risk-taking art, the risk being that the cleaning crew may accidentally sweep it up and throw it in the garbage.

No doubt the four retiring geniuses can put forth a critical theory, based on “the process of creation,” to explain why a pile of dirt becomes “art” when placed within the walls of a museum. I say good riddance and take your dirt with you.

← Customer Undertone at the Furniture Store
75 Startup Tools and Apps →

It will never be known what acts of cowardice have been committed for fear of not looking sufficiently progressive.