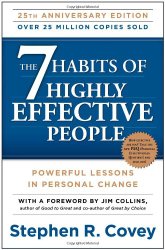 Stephen Covey, the author of the best-selling book “The Seven Habits of Highly Effective People,” died early Monday morning at 79 years old, according to The Associated Press.

Here are the seven habits:

One way to assess the value of advice is to ask, “Would anyone advise the opposite?” If the answer is no, then all you have are platitudes and truisms.

You get the idea.

By selling more than 25 million copies of this book, and becoming known as one of the leading business thinkers of his time, Covey revealed the vacuousness of the modern mind, although I don’t think that was his intention.

← How Did Civility Die?
Dog Talk →

We come and we go / That’s a thing that I keep in the back of my head.