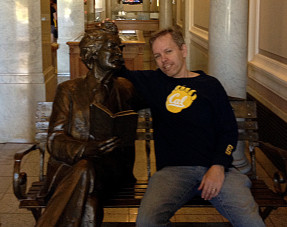 And Twain said, “That’s a good one! I’ve got to write that down!”

Actually, the Twain statue is just inside the main entrance of Doe Library at UC Berkeley. I asked the nerdy-looking Asian girl at the front desk, “Who’s the guy on the bench?” She stared at me for a second. “Kidding,” I said.

“At first, I thought it was Albert Einstein,” she said, “so it doesn’t surprise me when people don’t know.”

Whenever you find yourself on the side of the majority, it’s time to pause and reflect.