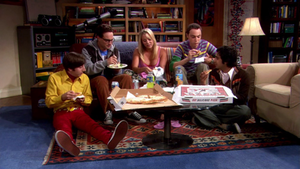 According to this recently published research paper, women aren’t interested in computer science because of media portrayals like “The Big Bang Theory,” in which technologists are depicted as socially awkward, interested in science fiction and video games and physically unattractive.

If that seems like a compelling line of reasoning, you can read a more complete write-up in this WSJ.com article.

← Are Walmart Employees Underpaid?
What Satan Lacked Was a Strategy →