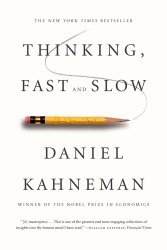 The notion that we have limited access to the workings of our minds is difficult to accept because, naturally, it is alien to our experience but it is true: You know far less about yourself than you feel you do.

It is the consistency of information that matters for a good story, not its completeness. Indeed, you will often find that knowing little makes it easier to fit everything you know into a coherent pattern.

The exaggerated faith in small samples is only one example of a more general illusion — we pay more attention to the content of messages than to information about their reliability, and as a result end up with a view of the world around us that is simpler and more coherent than the data justify.

Narrative fallacies arise inevitably from our continuous attempt to make sense of the world. The explanatory stories that people find compelling are simple; are concrete rather than abstract; assign a larger role to talent, stupidity, and intentions than to luck; and focus on a few striking events that happened rather than on the countless events that failed to happen.

Hindsight bias has pernicious effects on the evaluations of decision makers. It leads observers to assess the quality of a decision not be whether the process was sound but by whether its outcome was good or bad. . . . This outcome bias makes it almost impossible to evaluate a decision properly – in terms of the beliefs that were reasonable when the decision was made.

Stories of how businesses rise and fall strike a chord with readers by offering what the human mind needs: a simple message of triumph and failure that identifies clear causes and ignores the determinative power of luck and the inevitability of regression. These stories induce and maintain an illusion of understanding, imparting lessons of little enduring value to readers who are all too anxious to believe them.

For some of our most important beliefs we have no evidence at all, except that people we love and trust hold those beliefs.

Confidence is a feeling, which reflects the coherence of the information and the cognitive ease of processing it. It is wise to take admissions of uncertainty seriously, but declarations of high confidence mainly tell you that an individual has constructed a coherent story in his mind, not necessarily that the story is true.

[Philip Tetlock, a psychologist at the University of Pennsylvania] interviewed 284 people who made their living “commenting or offering advice on political and economic trends. . . . In all, Tetlock gathered more than 80,000 predictions. . . . Respondents were asked to rate the probabilities of three alternative outcomes in every case: the persistence of the status quo, more of something such as political freedom or economic growth, or less of that thing.

The results were devastating. The experts performed worse than they would have if they had simply assigned equal probabilities to each of the three potential outcomes. In other words, people who spend their time, and earn their living, studying a particular topic produce poorer predictions than dart-throwing monkeys who would have distributed their choices evenly over the options. Even in the region they knew best, experts were not significantly better than nonspecialists.

Rehearse the mantra that will get you significantly closer to economic reality: you win a few, you lose a few.

During the last 10 years we have learned many new facts about happiness. But we have also learned that the word happiness does not have a simple meaning and should not be used as if it does. Sometimes scientific progress leaves us more puzzled than we were before.

← Sugar Substitutes
Many Have Long Known … →

I was making myself hideously uncomfortable by not narrowing my attention to details of life which were immediately important, and by refusing to believe what my neighbors believed.