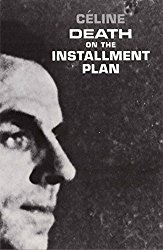 Death on the Installment Plan is a fictionalized coming-of-age story based on Céline’s youth in pre-World War I France.

Absent are heroism, transcendence, love and the possibility of love. Instead, there is a lot of human action that comes to nothing. Death is not ennobling.

That said, hopelessness has never been described with more wit, energy and imagination or more droll, breathtaking language.

Here’s a sample of the black comedy, as the narrator remembers a local physician (all ellipses in the original):

“The most exquisite deaths, remember that, Ferdinand, are those that attack us in our most sensitive tissues . . .” He had a precious, elaborate, subtle way of talking, like the men of Charcot’s day. His prospecting of the Rolandic, the third ventricle, and the gray nucleus didn’t do him much good . . . in the end he died of a heart attack, under circumstances that were anything but cozy. An attack of angina pectoris that lasted twenty minutes. He held out for a hundred and twenty seconds with his classical memories, his resolutions, the example of Caesar . . . But for eighteen minutes he screamed like a stuck pig . . . his diaphragm was being ripped out, his living guts . . . a thousand open razors had been plunged into his aorta . . . He tried to vomit them out at us . . . I’m not exaggerating. He crawled out into the living room . . . He damn near hammered his chest in . . . He bellowed into the carpet . . . in spite of the morphine . . . You could hear him all over the house and out in the street . . . He ended up under the piano. When the cardiac arterioles burst one by one, it’s quite a harp . . . it’s too bad nobody ever comes back from angina pectoris. There’d be wisdom and genius to spare.

← Is A.I. a Threat to Humankind?
Grounds for Dissolution →

Success, real success, in any endeavor demands more from an individual than most people are willing to offer—not more than they are capable of offering.