Working moms are destroying the nation

The labor force participation rates of mothers with infant children fell from a record-high 59 percent in 1998 to 55 percent in 2000, the first significant decline since the Census Bureau developed the indicator in 1976, according to the Fertility of American Women report released last week. 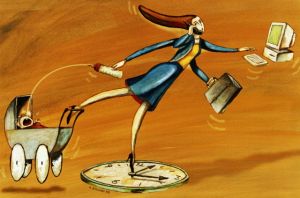 This was still much higher than the 31 percent first recorded by the Census Bureau in 1976.

And I would say, anecdotally, that the 31 percent in 1976 was much higher than the rate in 1958, the year I was born. The concept of “working mothers” was unheard of to me when I was a boy.

So it was somewhere between 1958 and 1976, then, that the idea of “having it all” began to take root: having a spouse, kids, a brilliant career, expensive cars, expensive vacations, expensive time-consuming hobbies, etc., etc.

And according to the data, this idea continued to gain in popularity until a couple of years ago, when it lost ground somewhat, perhaps temporarily.

And all this became possible because . . . kids don’t really need that much attention, do they?

Well, since 1976, we’ve produced a couple of generations of nitwits raised by nobody in particular, with no basic understanding of math, grammar, literature, science, geography, and so on.

So maybe the kids really did need some attention.

I find the “having it all” notion appalling because it involves hiring strangers to raise your kids.

I think back over all the people I’ve ever hired to do something for me, and how many of them did a truly outstanding job.

There really were not many.

The difference is that if I hire someone to, say, mow my lawn, I can live with an adequate result. And even if they really mess it up, I can still bounce back from that pretty easily.

But if I hire someone to raise my kids and they mess it up, then what?

← Remember That
Having it All! (Except the Kids) →

2 comments for “Having it All!”

Indeed she died to the realities of life with less pain than she had waked from many of its illusions.