Frequently Wrong But Never in Doubt

Absolute moral certitude through the ages 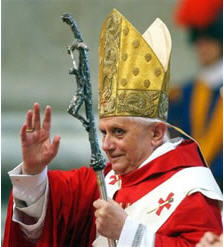 I read today where someone called the new pope, Benedict XVI, “a tremendous intellect” because he speaks 10 languages and has written 40 books.

I don’t know if that’s true, but let’s say it is. What are the 40 books about? His unquestioned acceptance of everything he’s ever been told?

Rising to a high-ranking position within the church seems to require an ability to believe, or at least pay lip service to, a great deal of received wisdom, without question or dissent.

That may indicate some sort of positive quality — I don’t think it does, myself — but it’s hardly indicative of a “tremendous intellect.”

A Dictatorship of Relativism

We are moving toward a dictatorship of relativism which does not recognize anything as definitive and has as its highest value one’s own ego and one’s own desires . . .

It must be great to be able to claim absolute moral certitude, even on complex and specific issues, but really, hasn’t the whole history of the church been one of moral relativism, not to mention total error?

Hasn’t the church always been ready to cozy up to any sort of totalitarian regime, as long as the regime was willing to aggrandize the church?

Wasn’t it only about a decade ago — 359 years after the fact — that the church finally lifted the edict of Inquisition against Galileo, and admitted that he may have been right about the Earth orbiting the sun? 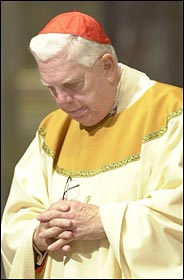 You may remember Bernard Cardinal Law as the former Archbishop of Boston, a position from which he resigned in December 2002, amid public outrage over his actions and inactions regarding child molesters in the clergy.

Among the priests under Law’s supervision were Paul Shanley — now serving a 12 to 15-year sentence for child rape — whose unorthodox ministry included rapes and molestations in rectories, restrooms and confessionals; and John Geoghan, accused of molestation by more than 130 people, and killed in prison in 2003.

Cardinal Law . . . whatever happened to that guy?

Well, Pope John Paul II was a fan of the cardinal’s pastoral work, and, following his resignation as archbishop, set him up as archpriest of St. Mary Major, one of the five major basilicas of the Roman Catholic Church.

I must say, for an organization that takes a hard line against any sort of sexual activity other than procreation within the bounds of matrimony, they sure have a lot of wiggle room regarding sexual abuse of children.

After John Paul II’s death and funeral, Joseph Cardinal Ratzinger, Dean of the College of Cardinals, gave Cardinal Law the honor of celebrating one of nine official Vatican masses during the nine official days of mourning.