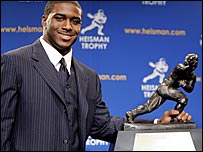 News flash: Everyone who doesn’t win is upset about it, but the protocol is this: Congratulate the winner and move on. Have some class. Grow up. You’re not in third grade anymore.

Man, I hope the Trojans kick his ass in the Rose Bowl.

Now, whoever the jackass is who voted for Drew Olson should have his eyelids clamped open like Alex in A Clockwork Orange and be repeatedly forced to watch USC’s 66-19 trashing of UCLA, in which Bush rushed for 260 yards, and would have had 400 if they’d left him in the game in the second half.

They really should publicly identify the Heisman voters so we can make that happen.

Non ridere, non lugere, neque detestari, sed intelligere. (Not to laugh, not to curse, not to lament, but to understand.)