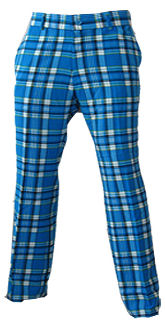 In the process of rearranging things in the house last weekend, my wife found a box of pictures of me as a boy and showed them to our son.

“Dude, those were funny,” he says. “There’s one of you sitting on a motorcycle –” He makes an angry face and pantomimes driving a motorcycle. “Vroom! Vroom! And you’re wearing — ha, ha — you’re wearing a pair of –” Now he’s laughing so hard he can hardly talk, but he manages to spit out “– plaid pants!” before collapsing in a coughing, sputtering fit.

I explain to him that plaid pants were popular in the 1970s.

“Mom!” he yells downstairs. “Where’s that box of pictures of Dad?”

“Under the desk in the den,” she yells back.

“I’ve seen those pictures,” I say, “so if you’re planning to show them to me and laugh about it, you’re wasting your time.”

← Thomas Jefferson’s Election Blog
The Lost Art of the Hickey →

Yet man is born unto trouble, as the sparks fly upward.