To Live and Die in Irvine

IRVINE – A group of solemn people sat around tables at a fast-food Chinese restaurant off Jeffrey Road on Wednesday night after a man was shot and killed while sitting in a white Lexus parked behind the eatery. 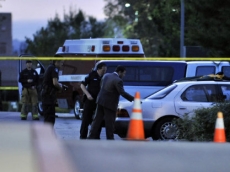 At least he died in a nice car. It’s Irvine, Jake!

I’ve been to that Chinese restaurant many times. (It’s a dine-in restaurant, not a fast-food place, despite what the Register says.)

Don’t worry about me though. Irvine is still the safest city in the country.

That guy must have gotten himself mixed up in some kind of trouble . . .

← Happy 200th Birthday, Charles Darwin
The Art of the Possible →

If we wait for the moment when everything, absolutely everything, is ready, we shall never begin.