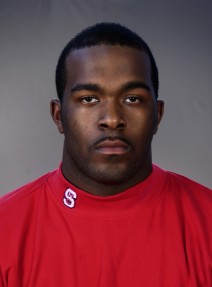 We’re waiting at LAX for a flight to Houston when a large black man in his 20s sits down near us in the waiting area.

“I could take that guy one-on-one,” my kid announces.

I’m about to mention to him that not every big black dude is necessarily a basketball player when he says, “Wait a minute, isn’t that Mario Williams?”

I have to admit to him that I wouldn’t recognize Mario Williams if I saw him.

He pulls up a photo of Mario Williams on his iPhone. “Yeah,” I say, “that does look like him.”

“And he’s waiting for a flight to Houston? That’s got to be Mario Williams.”

The final clue is that the guy is decked out in Adidas gear from head to toe. A Google search for “mario williams adidas” on the iPhone reveals that Mario Williams has a sponsorship deal with Adidas.

So we’re pretty sure we saw Mario Williams at the airport.

Continental changed up the seat assignments . . . the boy ends up in Row 8 while I’m back in Row 26.

“I’m way ahead of you,” he says. “I can pick up the rental car and drive to the hotel before you even get off the plane.”