“Duck Dynasty” star Phil Robertson has been put on an indefinite hiatus from filming the smash hit A&E reality series following inflammatory remarks about gay people he made in an interview with GQ magazine. . . .

In the interview, which appears in the January issue of GQ, Robertson, founder of the Duck Commander family business of duck calls, referred to gay people as “homosexual offenders” who would not “inherit the Kingdom of God.” He also said a woman’s vagina was “more desirable” than a man’s anus. 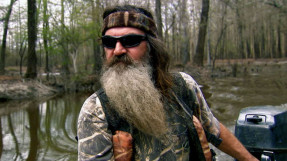 LET’S ENCOURAGE TOLERANCE AND DIVERSITY BY MAKING THIS GUY SHUT THE HELL UP!

“Don’t be deceived. Neither the adulterers, the idolaters, the male prostitutes, the homosexual offenders, the greedy, the drunkards, the slanderers, the swindlers — they won’t inherit the kingdom of God. … Don’t deceive yourself. It’s not right.”

That’s a pretty accurate paraphrase of I Corinthians 6:9-10, which says

A woman’s anus is more desirable than a man’s anus, but it’s not as desirable as a vagina. A man’s anus is a distant third in the desirability sweepstakes, and it’s even lower if you include mouths, sofa cushions, food products, etc.

This guy Robertson is on a “reality” show. That’s funny. There’s reality and then there’s “reality.”

He talks to a magazine and it turns out that in reality, he’s not as nuanced in his thinking as the people at GLAAD — whose job, by the way, is to be perpetually offended — would like him to be, and because of that, he can’t be on TV anymore.

I guess there’s such a thing as too much reality.

I count him braver who overcomes his desires than him who conquers his enemies; for the hardest victory is over self.