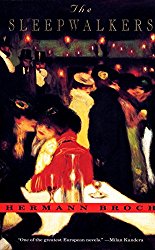 The Sleepwalkers is one of the most remarkable books I’ve ever read, very close to the edge of what can be accomplished with the written word.

I had never heard of either the book or the author — neither seems to have any following here in the States — but Amazon for some reason started recommending me post-WWI Austrian modernists.

(I also read Robert Musil’s A Man Without Qualities, which was extremely tedious.)

I don’t know who to compare Broch with, in terms of language, wit, psychological and historical insight — maybe Nietzsche, if Nietzsche had decided to write historical fiction.

The book chronicles, via multiple overlapping narratives, the moral history of Germany in the late 19th and early 20th century, and the disintegration of values that led to fascism.

And in his fear of the voice of judgment that threatens to issue from the darkness, there awakens within him a doubly strong yearning for a Leader to take him tenderly and lightly by the hand, to set things in order and show him the way; a Leader who is no one’s follower and who will precede him on the untrodden path of the closed circle and lead him on to ever-higher reaches, to an ever-brighter revelation; the Leader who will build the house anew that the dead may come to life again, and who himself has risen again from the multitude of the dead; the Healer who by his own actions will give a meaning to the incomprehensible events of the age, so that Time can begin anew.