Thomas Jefferson: Why I Don’t Wear a MAGA Hat 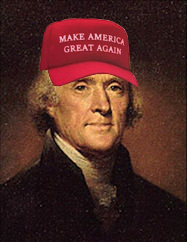 Folks mad that I said kid who lost his MAGA cap and a drink thrown on him got off easy. I just think he learned a valuable lesson in personal responsibility. You want to offend, be prepared to face the consequences.

This is why we fought a war to get away from the goddamn Brits.

I would personally not wear a MAGA hat in public for the reason cited, i.e., Trump opponents seem to be violent and easily triggered.

That said, if your idea of a good time is to steal a kid’s hat and throw a soda in his face, you should probably shut up about the tolerance and mental stability of others until you get your own shit together.

As for lessons in personal responsibility, the drink thrower is now in jail. He who laughs last, etc.

← Thomas Jefferson: Separating Babies and Mothers
We’ll All Go Together When We Go →

You spend a life seeking the Opportunity, without realizing that the decisive moment, the moment that justified birth and death, has already passed. It will not return, but it was — full, dazzling, generous as every revelation.