I saw this headline in the Orange County Register:

My first thought was, “What kind of a dog turns on its owner in a crisis? It’s got to be a pit bull.”

A pit bull spooked by the flames and smoke turned on his owner as the man tried to escape the flames with the dog in his arms. The man, who lived in the condo where the fire started, was badly bitten on both arms.

The man left a trail of blood down the stairs. The dog was not hurt in the blaze.

The dog wasn’t hurt, although an officer on the scene did offer to shoot the animal to keep the owner from being mangled any worse than he already was, an offer the owner declined.

Further investigation revealed that the burning condo also contained — in addition to the man and the dog — a stash of money, guns and drugs. So all in all, not a good day for this local dog owner.

Compare that with this heartwarming dog story from Buffalo, NY . . . 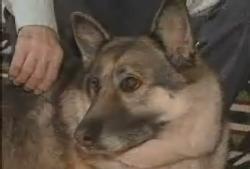 Eve and Norman Fertig, both 81, were trapped outside their home by heavy snow. Fortunately, they were not drug-dealing pit bull owners and had their dog Shana, a German Shepherd mix, with them.

As the cold and snow chilled them both without heavy coats and gloves, Shana started digging under the snow and trees.

The dog actually dug a foot wide tunnel about 20 feet to the home.

Shana barked but, the couple hesitated, so they say the dog came back and tugged on Eve’s jacket. She says the 160 pound dog actually pulled her onto its broad back and crawled through the tunnel. Her husband held on as well as they slowly crawled all the way back to their home.

So — if you’re thinking about buying a dog, you may want to ask yourself, “Is this a breed like a German Shepherd, collie or pug, known for loyalty and intelligence and likely to save my life in a crisis? Or is it a trashy breed like a pit bull or Rottweiler, more suited to guarding junkyards and crack houses, likely to not only not save my life, but to try to kill me when I’m trying to save his worthless life?”

You make the call.

4 comments for “Choosing the Right Breed”

. . . and the dance ends, the joke is forgotten; and strength vanishes, and youth is past.