The Man With Two Hats 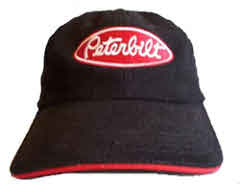 At the doctor’s office this afternoon, there was a man about 70 years old in the waiting room wearing a Peterbilt cap and holding a similar cap in his hands.

Later I asked the nurse why the guy needed two caps.

“He left his cap here on his last appointment,” she said. “We gave it back to him today so now he has two.”

“Oh that makes sense,” I said. “I was thinking it was maybe a symptom of whatever it is he’s being treated for.”