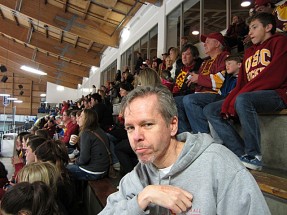 The Crosstown Cup was on the line Saturday night. The USC and UCLA hockey teams faced off at Anaheim Ice and the Trojans dominated pretty much as I expected.

It was also Senior Night — the last game of the season.

As athletes . . . let’s say that they were somewhat less good than my kid’s 18-and-under roller team from last season. Speed, puck control, rink awareness — all limited at best.

They were a lot better than UCLA though.

The fake ID market seems to be booming in Southern California. A lot of underage-looking kids were enjoying a beer at the game.

My wife asked one underage-looking couple, “How do you get beer? You don’t look old enough.”

“Um . . . there is a way to do it,” the girl replied, without providing any further details.