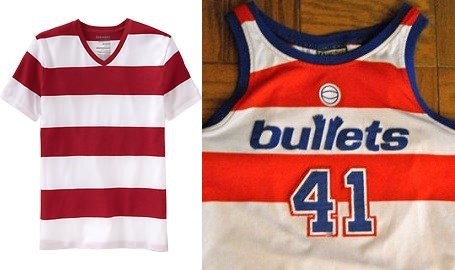 My boy is playing NBA 2K12 and points out that my Where’s Waldo shirt looks like the Washington Wizards (nee Bullets) throwback uniforms.

Ha ha. I get my comeback opportunity a few minutes later when his game player passes to a teammate, who scores, but his player doesn’t get credit for an ssist.

“HOW CAN THAT BE ANYTHING BUT AN ASSIST FOR ME?!” he shouts in disbelief. “That’s bad programming.”

← Goin’ to Bangalore
Customer Undertone at the Furniture Store →